While our school is a little spread out all over the place at the moment, I know there is still lots of great learning going on. Keep an eye on under the 'Home learning' page under the 'Children' tab where I am setting activities for you to do each day.

An email address has been sent home so you can keep in touch with me, tell me how you are getting on and what you have been up to. I have already seen some great work going on. Keep an eye out for our 'Learner of the week'!

This week is our final week before the summer holidays and we have been reflecting our the past year. We have written leaflets of advice for the children in Year 3 about what to expect in their new class in September.

This week we challenged Year 6 to a tournament on Times Tables Rockstars. Well done Year 4 - we won!

This week we have challenged Year 5 to a Times Tables Rock Stars tournament. We have worked as a team to get an incredible score!

We have been reading 'A Midsummer Night's Dream' adapted from the Shakepeare by Andrew Matthews. We have all enjoyed sharing the text together in our online lessons. Kavin has been so inspired, he has written his own poem about it.

Mrs Hampton's Star of the Week this week is...

This week we have continued to read 'A Midsummer Night's Dream'. We have thought about the feelings of the characters and been writing in the first person. Here is the story from Hermia's point of view - look out for our fronted adverbials and similes!

Some more or us have finished our tooth fairy pillows. What do you like about our designs?

We have been exploring states of matter in science and found out that gas is everywhere. Sirui has been watching the bubbles of gas being pushed out from between solids when he added water. 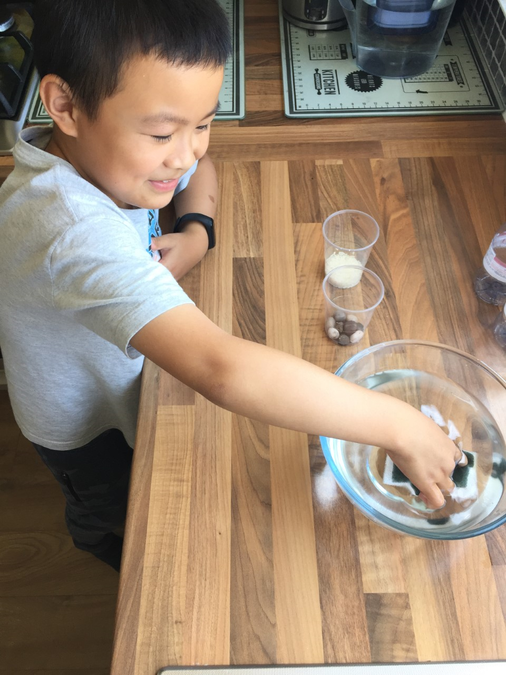 And Mrs Hampton's Star Home Learner of the Week this week is...

We have started to read 'A Midsummer Night's Dream' this week.

This week, Mrs Hampton's Star of the Week is...

We have had a really busy week writing and sewing. Look at some of our wonderful instructions for magical seeds and some of our tooth fairy pillows.

Mrs Hampton's Star of the Week is...

Star of the Week

We have been very busy this week investigating the Arctic and continuing our work on the digestive system. Here is just some of our wonderful work.

In English we have been finding out about wind farms. We have written newspaper reports about a storm that hit a village.

Read all about it...

In our online lessons this week we have been learning to write persuasive letters in response to the wind farm in 'Blusterville'. Would these letters persuade you to move the wind farm? Blusterville Council - watch out!
Dylan
Dylan (2)
Josh
Josh (2)
Charlie
Joseph
Ted
Bea
Ashwin
Connor
Connor (2)

And Mrs Hampton's 'Star Home Learner of the Week' this week is...

We have been busy writing metaphor poems about a storm. Can you see what animals a storm could be?

by Connor
by Joseph
by Joshua
by Lily

Mrs Hampton's Star Home Learner of the Week this week is...

What a busy week we have had this week! We began our live lessons on Google Classrooms so it has been great to see each other again and join together in our learning. Your enthusiasm has been fantastic - well done everyone!

Here is just a small sample of the work that has been flooding in this week!

Science - look at those eggs! I think everyone agrees water is the healthiest drink for our teeth!

I have seen some fantastic writing this week about The Lighthouse animation we have been studying. Many of us have included expanded noun phrases, adverbial phrases and even some fronted adverbials.

Here is one I particularly enjoyed...

The Lighthouse by Charlie W

Mrs Hampton's Star Learner of the Week is...

Children have created triptych art (three panels of related images) to show the feelings of Mary Magdalene or the disciples on the road to Emmaus after Jesus' resurrection.

By Bea
By Dylan
By Charlie L

This week we have set up an experiment to find out how drinks affect our teeth. Egg shells, which represent our teeth, have been put into different liquids for a week. What do you predict will happen to the egg shells? Which liquids did you choose to leave your egg shells in?

We have found out about Anglo Saxon kingdoms and made posters to show our research about known Anglo Saxons.

We are writing our own accounts of the 'Lighthouse' film we have been watching.

by Charlie W
By Sirui
By Charlie L
By Joshua

Mrs Hampton's Star Home Learner of the Week is...

After listening to the music 'Little Train of Caipira' by Heitor Villa-Lobos, children have written their own poems about a train journey.

We have started to look at different sorts of teeth. We made models using things from around our home.

After looking at other artists work, children chose their favourite to draw themselves.

This weeks Star home learner of the week is...

Week 2 of learning from home.

We may have to be at home but that doesn't stop the wonderful creativity of Year 4 children.

Look at some of the wonderful posters made to advertise a production at The Globe Theatre from the times of Shakespeare...

We started the week continuing the story of Rumpelstiltskin

Mambo animations based on the music from West Side Story

The Easter Story by Charles and Bea

Year 4 have completed some amazing work this week and it has been very difficult to choose someone but the Star of the Week this week is...

The Soap and Pepper investigation

Mrs Hampton's Star Home Learner of the Week is...